Degradation of ranitidine and changes in N-nitrosodimethylamine formation potential by advanced oxidation processes: Role of oxidant speciation and water matrix

This study investigated the effects of thirteen (photo/electro) chemical oxidation processes on the formation potential (FP) of N-nitrosodimethylamine (NDMA) during the chloramination of ranitidine in reverse osmosis (RO) permeate and brine. The NDMA-FP varied significantly depending on the pretreatment process, initial pH, and water matrix types. At higher initial pH values (> 7.0), most pretreatments did not reduce the NDMA-FP, presumably because few radical species and more chloramine-reactive byproducts were generated. At pH < 7.0, however, electrochemical oxidation assisted by chloride and Fe2+/H2O2, catalytic wet peroxide oxidation and peroxydisulfate-induced pretreatments removed up to 85% of NDMA-FP in the RO brine. Ultraviolet (UV) irradiation or prechlorination alone did not reduce the NDMA-FP effectively, but combined UV/chlorine treatment effectively reduced the NDMA-FP. In contrast, after UV irradiation (2.1 mW cm−2 for 0.5 h) in the presence of H2O2 and chloramine, NDMA formation increased substantially (up to 26%) during the post-chloramination of the RO permeate. Mass spectrometric analysis and structural elucidation of the oxidation byproducts indicated that compared with the reactive nitrogen species generated by UV/NH2Cl, sulfate radicals and (photo/electro)chemically generated reactive chlorine species were more promising for minimizing NDMA-FP. Unlike, the hemolytic •OH driven by UV/H2O2, the •OH from Fe(IV)-assisted pretreatments showed a significant synergistic effect on NDMA-FP reduction. Overall, the results suggest the need for a careful assessment of the type of radical species to be used for treating an RO water system containing amine-functionalized compounds. 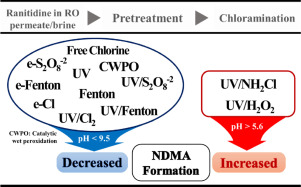